skip to main | skip to sidebar

**Featuring Stream and the Blue Dragon Band - come dance with us!**
HEART TO HEART, SOUL TO SOUL CELEBRATION
30 YEARS of LIFE, LIGHT and LOVE
Do come!
CELEBRATE, MEDITATE, SHARE, CARE, EAT and MOVE/DANCE TOGETHER!

Date: SATURDAY, April 25, 2009
Time: 6 PM
Please bring favorite dinner dish to share!
Place: Network of Light 6304 30th St, NW Washington, D.C. 20015
Corner of 30th St. and Tennyson Streets in the cul-de-sac, 2 min. from Chevy Chase Circle. (Please park on 30th or Tennyson Streets and NOT in the cul-de-sac)
EVENT DETAILS:
6 pm - Meditation and sharing about what is true for us now -
how are we feeling in this amazing time and how can we serve each other and the community.
7:15 pm- Shared dinner.
8:00 pm - Wonderful STREAM AND THE BLUE DRAGON BAND.
Their pulse will get under our skin and we will have a joyous time!
Move to rhythms from the Middle East, Africa and Brazil.
Event is free, however any love donations for the band are appreciated.
For more info call: 202-363-9343

Blessings,
Sherry
(\o/)
/_\
www.SherrySherry.Com
www.ThePeaceChapel.com
Sherry is on XM Radio - Mondays at 1 PM & 7 PM (ET)On Broadminded - XM Channel 155 - Take 5
"It is not sufficient for religious people to be involved with prayer. Rather, they are morally obliged to contribute all they can to solving the world’s problems."-His Holiness the Dalai Lama
"History does not entrust the care of freedom to the weak or timid." - Dwight D. Eisenhower
Posted by Claudia Davis at 4/24/2009 07:12:00 AM No comments:

The audience snickered and the judges of "Britain's Got Talent" either rolled their eyes or allowed their blank expressions to betray their bemused skepticism as the awkward-looking middle-aged woman told them she wanted to be as famous as the popular British actress and singer Elaine Paige.Then Susan Boyle began to sing, and they were spellbound and shocked by the beauty of her voice and rose to their feet in applause.But Father Basil Clark, who watched the show on television at his home in Broxburn, Scotland, was not surprised.He has seen the situation unfold many times before, having regularly accompanied Boyle, 47, on the annual Legion of Mary pilgrimage to the Marian shrine in Knock, Ireland.

"When I watched the judges' faces it reminded me of what I was like when I first saw Susan singing -- absolutely blown away by the quality of the singing and by that fantastic voice," said Father Clark, dean of West Lothian, the district that covers Boyle's home village of Blackburn."Anyone who sees her for the first time behaves the same way. I have never heard her sing badly, though she might lose the words if the stress gets too much," he told Catholic News Service in an April 16 telephone interview.Boyle first appeared before judges Simon Cowell, Piers Morgan and Amanda Holden on the ITV1 sister show of "America's Got Talent"; it was broadcast April 11.Her fame spread on the Internet, and in just five days she had attracted more than 15 million YouTube viewings of her rendition of "I Dreamed a Dream," from the musical "Les Miserables."Part of Boyle's attraction is that she appears to be such an unlikely candidate for stardom. She said on TV that she has "never been kissed" and has lived alone with her cat since her mother died in 2007.According to British media, she has learning disabilities as a result of being starved of oxygen at birth. She is unemployed and, as a churchgoing Catholic, her social life revolves around her family and her parish of Our Lady of Lourdes. She also enjoys karaoke in her local pub.

Father Clark said, "When she gets up to sing it can either be wonderful or you can get the unpredictable eccentric behavior, but it is to do with the fact that she has learning difficulties."In a sense, there is a beautiful voice trapped in this damaged body," he said. "It is an absolute contrast. There she was on television acting very peculiarly and the audience was expecting peculiar things to happen and then a voice of an angel comes out -- and that's Susan."Father Clark said that local people who knew Boyle, the youngest of nine children of a family descended from Irish migrants, were "enormously proud of her and wish her the best but they are aware of the risks she is running," adding that her behavior has previously drawn cruel taunts from children."People are slightly worried about what might happen after this bout of fame," he explained."I am quite worried for her," he added. "I think it's great at one level. It might just be the thing that will make her, but she is a very vulnerable person and it could be quite difficult."It is a great opportunity for her and as far as I am concerned she should make the best of it, and if it lasts, it lasts, and if it doesn't, then it's still more than almost any one of us will ever achieve," he added. "It is important in sustaining her and making sure this is all a very, very beneficial experience."He described Boyle as "a woman of great faith" who was often "very gentle and very caring" though she could also be "needy and demanding."The world's media has camped outside Boyle's home where she grew up and where she still sleeps in the same room as when she was a child.But Boyle has decided to temporarily escape the limelight to stay with friends as she prepares for the next round of the competition, in which she is expected to sing "Whistle Down the Wind," by Andrew Lloyd Webber.She did give an interview to "The Early Show" on CBS News in which she said that her instant fame "hasn't really sunk in yet."She said that she wanted to make her performance "a tribute to my mother" who had encouraged her to sing."I knew it was something I had to do," she said. "I had to get on with it. That's where the courage came from, my mother."The ones who made fun of me are now nice to me," she said. "So, I think I may have won them 'round."

***SPECIAL NOTE FOR THIS SUNDAY'S
MEDITATION AND MESSAGE SERVICE:

THE PEACE CHAPEL WILL BE ACCEPTING DONATIONS OF SHOES (in ANY condition!) TO TAKE TO THE SCHOOL IN ASHBURN NEXT WEEK,
for their special project of placing 400,000 pairs of shoes on the National Mall, to represent the lives lost in the genocide in Darfur. Afterwards any shoes in usable condition will be donated to homeless shelters and other charities. If you are not able to join us on Sunday evening, donations will be accepted through Tuesday, April 21st, at our front door. AS ALWAYS, DONATIONS MAY BE DROPPED AT THE FRONT DOOR 24/7 (no need to knock - makes the dogs BARK) The Peace ChapelAngel Hill House 129 Governors Drive Leesburg, VA 20175

Blessings, Sherry
(\o/)
/_\www.SherrySherry.Com
www.ThePeaceChapel.com
Sherry is on XM Radio - Mondays at 1 PM & 7 PM (ET)On Broadminded - XM Channel 155 - Take 5
"It is not sufficient for religious people to be involved with prayer. Rather, they are morally obliged to contribute all they can to solving the world’s problems."-His Holiness the Dalai Lama

For "John" who left his body by hanging himself last week, may he be cradled with love and returned to peace of heart. Peace and comfort for the family and friends he left behind.

Prayers of peace and strength for JONNIE WATERS PHILLIPS, who lost 2 sons (age 36 and 38) in two weeks. Clint (age 36) was working and fell 115 feet off of a tower, 2 weeks later his brother Sam (age 38) died of a heart attack in his sleep, leaving behind a wife and 4 children. Prayers for all of the family members left behind and for the two souls that made their transitions so suddenly.

Prayers of healing and recovery from surgery for Charlotte in Florida, and Bob in W. VA.
Prayers for Liz dealing with many family challenges including her teenage sons that are having a challenging time.

For Karen's peace and joy as she has returned to spirit, and comfort for her family and 2 sons left behind.

Prayers for Ashley and his family, as doctors search for answers to his heart problems. He is age 23 with a wife and 2 young children.

Prayers for Hank after his transition that he may find rest, peace and repose that he couldn't find in life. Prayers for his wife and daughter left behind for their peace, strength and knowing that they are loved by many.

Prayers for MJ as she continues to fight breast cancer miraculously, and amaze her doctors.

Prayers of strength and healing for Debbie's Dad in Florida as he recovers from heart conditions.

Prayers of grace and serenity for Jana as she goes some difficult life transitions during this time.

Prayers for our four legged family members that have left the physical world to return to Spirit: MikaEl & Chelsea (Ray & MJ)

Prayers for healing and glowing health for Aidan, a young boy (age 6) facing many medical tests seeking answers to his medical issues, and prayers for strength and peace for his Mom as they go through this long process together. Prayers of enlightenment for his doctors and nurses that they may quickly see what his needs are and begin the healing process.

Prayers for Bill as he enters hospice.

And prayers for all those that are in some need, God knows who they are and what their needs are, may they all be blessed and touched by God's Presence and Love, and may they be uplifted, and filled with the Joy of Spirit.

"It is not sufficient for religious people to be involved with prayer. Rather, they are morally obliged to contribute all they can to solving the world’s problems."-His Holiness the Dalai Lama

In the natal chart, Pluto tends to operate even more Plutonian when it is retrograde. It is far more intense, it possesses a higher degree of concentration and it, therefore, gives greater insights into the subconscious. Because of this intensity, the individual can see much more than normally possible and it is easy to become suspicious of the motives of others. The powers of regeneration are far greater when retrograde. People with a natal retrograde Pluto have a tremendous ability to overcome major illnesses that might otherwise cause permanent disability. Remember, retrograde motion is always directed toward inner activity such as the psyche or psychological patterns that affect the physical body. Direct motion, on the other hand, is directed towards external circumstances.

Under any Pluto transit, we feel pressured to eliminate and release the old, outworn, outdated and obsolete in our lives. When Pluto is transiting retrograde, we are urged to let go of attitudes, thinking or communication patterns, security drives, rigid emotions; a time to undergo an internal form of house cleaning. It is a good time to research into our own Souls in order to determine exactly what we do or do not need. Because Pluto retrograde imparts an intense power for investigation, we should use this time to assess what reoccurring patterns in our lives make us feel out of control, where and why do we continually give our power away, and under what circumstances do we react so defensively that we elicit attacks from others. Pluto retrograde marks a time wherein we should seek to gain greater control over our personal life; Pluto direct is better for gaining control over professional and financial areas. My most frequent observation of Pluto retrograde is that many people do seek some form of regenerative activity. I have seen people undertake a series of internal cleansings, detoxifying diets, Eastern disciplines that put them in touch with the inner self and even intense psychological reforms.

IMPORTANT DATES:
PLUTO-MARS: APRIL 26-27; AUGUST 25-26 2009 – Pluto- Mars be intense and even obsessive mentally. When afflicted, we are urged to resist external pressure, control or manipulation by others. Do not act under pressure.

PLUTO-VENUS: APRIL 2-3 9200 – This indicates a need to change attitudes in relating. Money and relating can become complicated. 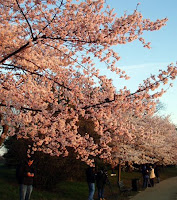 Snapshots of the Cherry Blossoms taken in Washington DC.